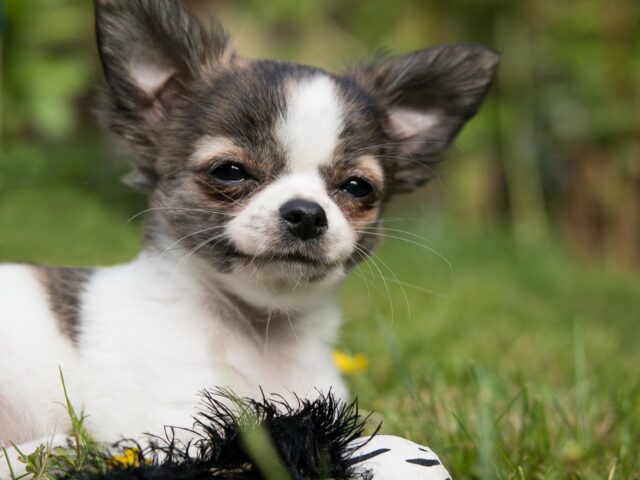 It’s amazing to have puppies around, don’t you think? They are so amusing to watch. Despite their quirky antics, they can be quite naughty too. Their naughtiness comes out at times when they really want things to go their way.

In this particular video, one tiny yet energetic dog was caught teasing a sleepy bulldog that’s twice his size! And it’s the cutest thing you’ll ever see.

As seen in the video, the sleepy bulldog was just minding his own business on the ground, hoping to take his much-needed nap. But his naptime was interrupted when a cute and playful Chihuahua came along.

The Chihuahua continued to adorably annoy the resting bully. But after a few seconds, he stopped tugging on his tail.

With a sigh of relief, the bulldog assumed it was over. However, he was wrong.  The Chihuahua came running back and forth from the bulldog’s tail to head, just to catch the big dog’s attention again.

The Chihuahua, being the small dog that he is, climbed onto the bulldog’s face all the way to his ears. The bigger pup tried to keep the tiny dog away from his ears by biting his legs gently.  It was like giving a warning sign to stop, but it did not work as he expected.

Despite the Chihuahua’s naughtiness, the bulldog kept his calm demeanor and remained patient with his little friend. Not once did the Chihuahua get barked at by the bulldog. Instead, he would just gently nudge his cute nose to push the Chihuahua away.

Watch the cute Chihuahua teasing the bulldog in the short clip below.