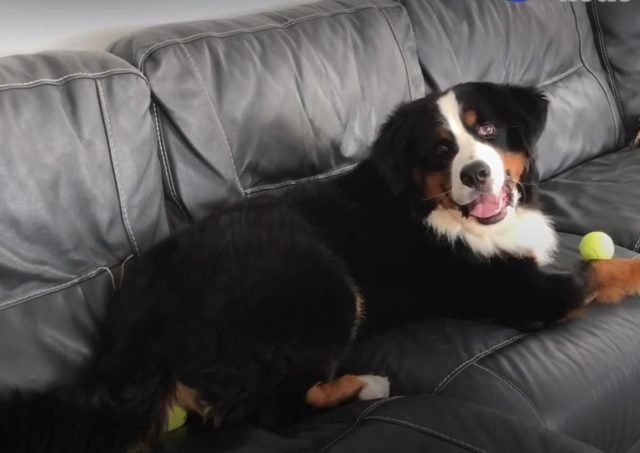 Reese is a Bernese Mountain Dog who is obsessed with tennis balls. His fur mom, Clare McCarthy, shared that Reese acts like a chicken guarding its eggs.

This dog is about to be surprised with GIANT tennis balls 🎾😁

Clare said that she always finds tennis balls in random places in her apartment. She usually discovers them under her couch, in her bed, and even in her bathtub.

Clare recalled that Reese always lays on the ground and barks at his tennis balls if he is in the mood to play, but just do not have the energy to do so. Her dog thinks that the ball would grow legs and walk closer to him if he barks at it.

Clare shared that she sometimes sees a green fuzz on Reese’s tongue, and she thinks that her dog does not have an idea that it is there. Clare admitted that she does not tell her dog because she does not want him to get embarrassed.

Clare recalled that Reese had been obsessed with tennis balls ever since he was a puppy. She decided to surprise Reese with giant tennis balls one Christmas morning, and Reese went crazy.

Clare shared that Reese could not decide which of the three giant tennis balls he was going to play with first. Clare recalled that if she could translate her dog’s reaction, it would definitely be that getting those gifts was the coolest day of his entire life.

Clare believes that her dog’s reaction looked like he was able to hit the jackpot because of how priceless the look on her dog was. Reese played with the giant tennis balls all night.