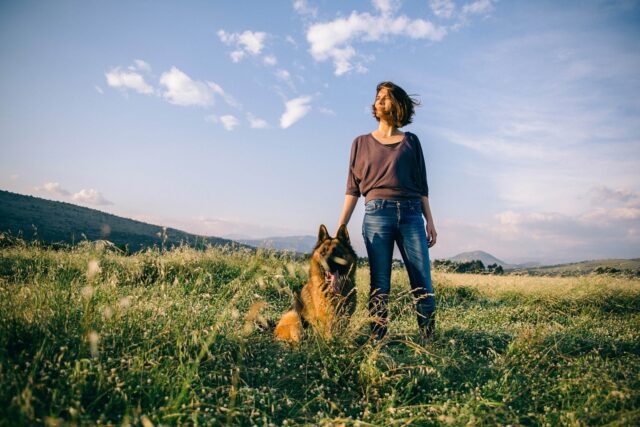 A peculiar box with two ears sticking out of it piqued the interest of a woman named Alaina. She curiously peeked inside the box and to her surprise, she saw a female German Shepherd puppy.

Alaina took the puppy out of the box and a few moments later, she decided to race to the nearest vet to get the little girl checked up.

As soon as they came to the vet a problem presented itself in the form of the puppy sprawled on the ground. It wasn’t anything like she was emaciated it’s just that she didn’t have the ability to walk. She definitely had the spirit as her tail just wagged non-stop but her leg muscles weren’t there to support her. And so with her sprawled on the ground at all times, they dubbed her as Starfish.

While Starfish definitely reflected her current state, it didn’t reflect her relentless attempts at movement. She would continuously try and get from point A to point B in a swim-like motion making it clear to anyone that she was not about to give up.

The shelter’s staff decided to let her just rest and not force any more movement so that she wouldn’t suffer more. However, the shelter executive director saw the spark in Starfish and suggested otherwise. They discovered that Starfish had swimmer syndrome is a developmental abnormality characterized by a delay in the ability to walk and move. And fortunately, this was curable.

Swimmer syndrome can be addressed and resolved through different forms of treatment but for now, Starfish needed someone to look out for her. That’s when Starfish met her mom, Maggie. Maggie was a foster for the shelter where Starfish was found and she decided to take up the responsibility of taking care of Starfish.

Maggie quickly became attached to Starfish and they spend lots of time together as Starfish can’t really go anywhere without Maggie. A strong bond slowly grew between them. As soon as Starfish was ready for therapy and treatment Maggie’s presence was constant. She cheered on Starfish and, in true dog-mom fashion, gave her treats to help motivate her.

Every step in Starfish’s recovery, Maggie was there and she never left her side.

The bond shared between them was so strong that Maggie failed to foster her and adopted her instead. While Maggie’s parents were on the fence about it, she persuaded them by running away and coming back an hour later. She just didn’t want to be separated from the dog she saw swim on land to crawl and run in the future.

With each therapy session over, Starfish came closer and closer to using the same legs that didn’t allow movement before. A year later, the land swimmer became a land runner instead. All the therapy they went through paid off and the name Starfish will just be a reminder of a distant past.